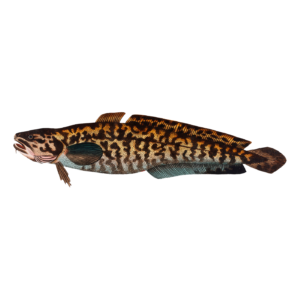 The Lota lota  (Burbot) eDNA detection kit is able to detect the fish species Lota lota in all water samples worldwide and contains enough materials for 20 samples to be analysed in 8 fold (200 qPCR tests). The kit is based on the fast, sensitive, and proven Taqman® probe qPCR technique. The kit contains primers and a probe for detecting a highly specific sequence present on the mitochondrial DNA of the species Lota lota.

Detection as a service
We offer the detection of Lota lota also as a service. See our eDNA service website (in Dutch) or contact us for more information about sampling, sending,  and pricing.

The burbot (Lota lota) is the only gadiform (cod-like) freshwater fish. It is also known as bubbot, mariah, freshwater ling, the lawyer, coney-fish, lingcod, freshwater cusk, and eelpout. The species is closely related to the marine common ling and the cusk. It is the only member of the genus Lota. For some time of the year, the burbot lives under ice, and they require frigid temperatures to breed.

Burbot have circumpolar distribution above 40°N. Populations are continuous from the British Isles across Europe and Asia to the Bering Strait. In North America, burbot range from the Seward Peninsula in Alaska to New Brunswick along the Atlantic coast. Burbot are most common in streams and lakes of North America and Europe.

Burbot live in large, cold rivers, lakes, and reservoirs, primarily preferring freshwater habitats, but able to thrive in brackish environments for spawning. During the summer, they are typically found in the colder water below the thermocline.  As benthic fish, they tolerate an array of substrate types, including mud, sand, rubble, boulder, silt, and gravel, for feeding. Adults construct extensive burrows in the substrate for shelter during the day. Burbot are active crepuscular hunters. Burbot populations are adfluvial during the winter months, and they migrate to near-shore reefs and shoals to spawn,preferring spawning grounds of sand or gravel. (source: Wikipedia)

In English: Burbot
In German: Quappe
In French:Lotte
In Dutch: Kwabaal

The kit is developed and optimized to be used on eDNA isolates purified using the eDNA isolation kit (#SYL002) from Sylphium molecular ecology.
Other eDNA isolation methods/kits can be used as well. Please contact us to get more information how to use the obtained isolates from other methods/kits to get reliable results with the Lota lota eDNA detection kit.