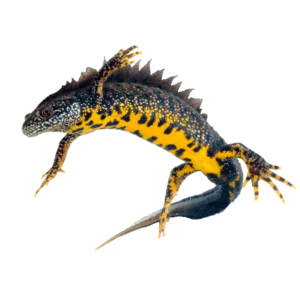 Detection as a service
We offer the detection of Triturus cristatus also as a service. See our eDNA service website (in Dutch) or contact us for more information about sampling, sending,  and pricing.

The northern crested newt, also known as the great crested newt or warty newt (Triturus cristatus) is a newt in the family Salamandridae. The range of the northern crested newt covers most of Europe, although the species is not found in Southern Europe. The northern edge of its range runs through northern France, Great Britain and southern Scandinavia to the Republic of Karelia in Russia; the southern margin runs through central France, southwest Romania, Moldavia and Ukraine, heading from there into central Russia and through the Ural Mountains. The eastern extent of the great crested newt’s range reaches into Western Siberia, running from the Perm Krai to the Kurgan Oblast.

Outside of the breeding season, great crested newts are forest-dwellers and inhabit coniferous, mixed and deciduous forests, as well as bushland, meadows, and parks and gardens. In the southern extent of their range and on the edges of steppe environments, they also inhabit insular forests.

The kit is developed and optimized to be used on eDNA isolates purified using the eDNA isolation kit (#SYL002) from Sylphium molecular ecology.
Other eDNA isolation methods/kits can be used as well. Please contact us to get more information how to use the obtained isolates from other methods/kits to get reliable results with the Triturus cristatus eDNA detection kit. 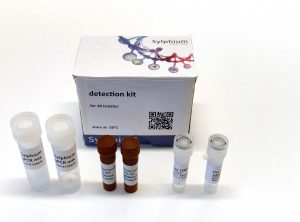